People with glasses have a 3 times lower risk of coronovirus. 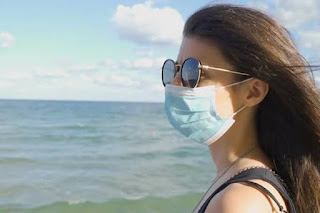 If you also have some type of visual impairment that you are wearing on a regular basis to overcome, then there is good news for you.  A new study in India has found that people who wear glasses are 3 times less likely to be infected with coronavirus.  This is because in most cases when a person touches the hand, nose and mouth infected with the virus, the virus enters the body.  In such a situation, when there is a mask on the mouth and nose and eyeglasses, people wearing eyeglasses touch their eyes less and therefore have a lower risk of getting Kovid-19 infection.  Nineteen percent of the people in the study wore glasses regularly.  medRxiv is a world renowned health science website.  On which this study has been published in India.  The study was conducted at a hospital in Kanpur, North India and involved 304 people by the researchers.  It had 223 males and 81 females.  All these people were aged between 10 and 80 years and all these people had symptoms of Kovid.  Among the people involved in the study, 19 percent were those who wore glasses most of the time.

Some doctors also say that people wearing contact lenses should use glasses to protect themselves from the corona virus.  In previous years, the JAMA ophthalmology 11H41 g fahi zis study was also published in the year 2020 stating that spectacle wearers are exposed to the corona virus and become infected.  See also: drink this drink to get rid of belly fat forever

Each person touches the face and eyes 23 times on average for 3 hours.  Researchers involved in the study found that on average, participants touch their faces 23 times per hour and their eyes on average three times an hour.  During this time it was found that people who wore glasses regularly were at risk of Kovid-19 infection 2 to 3 times.  Studies have shown that touching and rubbing the eyes with a contaminated hand can be an important way of spreading the infection.  Prolonged use of eyeglasses may prevent repeated touching and rubbing of the eyes.  It was also counted in a study done in 2020.