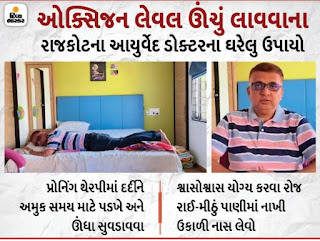 Another wave of corona is going on across the country, including Gujarat, in which the virus has changed its strain.  The transition to this wave is growing very fast and patients in their 30s and 50s are also becoming more serious.  The only major cause of patients' serious condition is a decrease in oxygen levels due to infection in the lungs.  Ayurvedic doctors have advised at home that if your oxygen level remains low, sniff 1 tablet of camphor, 1 teaspoon of rye, half a teaspoon of salt and half a teaspoon of ajma in a sugar bag.  Doing so raises the oxygen level. 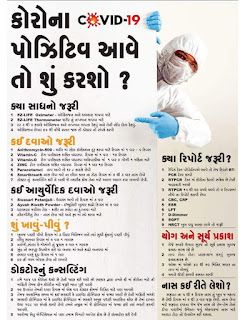 An estimated 40 per cent of patients have been found to have low oxygen levels, which has led to a great need for oxygen bottles, ventilators and remedial injections in the city.  In the midst of all this, it is imperative to treat Desi and Ayurveda.  Some suggestions have also been made by the Ayurvedic doctor so that the oxygen level of their body can be maintained if people adopt Ayurvedic treatment.

Doctor of Rajkot Atharva Ayurveda Hospital Dr.  Gaurang Joshi had a special conversation with Divya Bhaskar and suggested some solutions on how to increase the oxygen level.  Along with this, trees have been instinctively giving oxygen to the human race since its birth and this is the basis of human life, but today when trees are depleted in the city, on the other hand, it has a fatal effect on the body's ability to take oxygen.  Now, to get oxygen artificially, on the one hand, they are rushing towards the patients and on the other hand, the family and sincere doctors are rushing to save them. 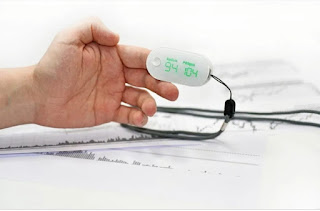 -Proning therapy to put the patient to bed for some time.

-Do rye-salt in water and take boiled snuff daily to make breathing proper.

- To do daily pranayama, if it does not come, keep a calm mind, sit up straight and take deep breaths.

-Spend the day in a way that breathes natural air, keep the doors open.

-Exercise, work according to strength and time.

-Keep the company of greenery and trees.

Arranged five pillows on the bed and advised to sleep upside down.

How to get rid of the virus with lemon

Dr.  Gaurang Joshi further said that you have to cut the lemon in your house and extract the juice from it.  Put two drops of this juice in your nose.  Like drops of juice you put in the nose so it will come in the mouth, which has to be spit out.  This interest will cause you to sneeze immediately.  Cough will start flowing from the nose later.  With this flow the virus will go away.  If there is inflammation in the nose, apply coconut oil, so that the inflammation in your nose will gradually stop.  Rinse the extracted lemon juice with turmeric and salt, which will get rid of the virus around your mouth.  You can get this home remedy for two-three rupees. 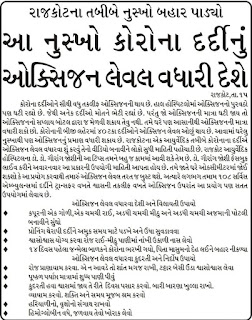