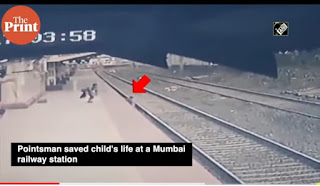 Let me tell you, the pointsman mayur shelke was on duty at wangani railway station of mumbai division of Central railway. Just then a woman was walking with her child on platform number 2 , so that chaild falls feom the platform down on the railway track. At the same time a high speed train is coming from the front. Standing a few meters in the meantime, the mayur  saw the child on the railway track, and sprinted very fast and saved himself and child's life, All these incident happen within just 9 seconds when the child falls from the platform and the mayur comes running and approaching the train. The entire incident was captured in the CCTV camera installed at the station. The video of which becoming very viral on social media.

Mayur is highly praised for his bravery. Railway minister piyush goyel himself announced the award to mayur by tweeting the video . After a conversation with mayur , goyel made several tweets and announced the award to him. Piyush goyel tweeted that he os proud of mayur shelke who has this courage. Schalke has done this by putting his life at stake. The child's mother sangeeta shirsat says that the amount or thanks she can give is kess. By saving their lives they have saved my son's life. Let me tell you, shelke has just joined the railway 6 mounth ago. According to the viral video, both the mother and child of the child are visually impaired.

Railway minister piyush goyel has announced a prize of Rs 50000 for bravery, courage and intelligence readiness to jabaj pointsman mayur shelke, who saved the life of child who fell on the track at wangani railway station of central division's mumbai division. Actually, it is mayur shelke who has saved the life of a child accidentally falling on the track. Mayur shelke's video saving the child's life is becoming quite viral on social media.