We often get the data about the Longest Sixes (Biggest Sixes) in a particular match or instead in a specific tournament. But are we aware of the Longest Sixes in international cricket (T20, ODI’s, and Test Cricket)? Well, no need to raise your brows! In this very article, we are going to summarise the longest sixes.

In international cricket, some innings have become eternal and became history. I mean, who can forget the last six of MS Dhoni in World Cup 2011, or the full monty by Yuvraj Singh in the T20 World Cup 2007? And what made these innings remarkable? Yes! Those sixes! Every cricket lover loves to see the ball fly into the gallery. And the batsman sends the ball farthest in the gallery always becomes a sensation of cricket!

Cricket has over the years been regarded as a gentleman’s game, where finesse and technique are at the epitome when it comes to the batsmen. Technically gifted and crafty players have been held in high regards and there have been many instances where six-hitting has been attributed to an act of exhibition of brute force by a player.

While it does take some arm strength to hit the ball into the stands, it is a combination of power, technique and timing that takes a hit from being just another six to become a shot that is remembered for years to come. In a game of cricket, as important it is to take singles, rotate the strike and make sure that the scoreboard keeps ticking, sometimes it is that one six that differentiates between the team that ends up on the winning side and the one that loses.

And, there are only a select few players who have the capability to hit the ball sailing into the stands for a memorable maximum at will. So, here we will have a look at the 10 such players whose hits surpassed every other ever in the history of international cricket in terms of the distance it travelled.

England beat Pakistan by 45 runs in the second T-20 match.  England's Liam Livingstone hit a 125+ meter six in the match.  Commentators and social media users called it the longest six in the world.  The Pakistan team had a target of 201 to win, in response to which they were able to score only 155 runs in 20 overs. 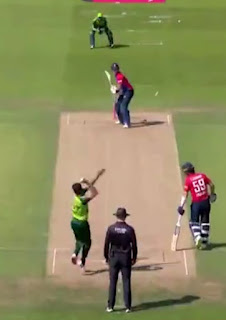 According to experts and commentators, this is the longest six in the world

English batsman Liam Livingstone has been in good form since the first match of the series.  He scored a century in the first match and played a crucial innings of 38 off 23 balls with the help of 2 fours and 3 sixes in the second match.  Livingstone had his longest six in this innings.  According to experts, this six is ​​125+ meters long.  However the official length of this has not been measured.

Harris hit a six off the 16th over

The incident happened during the 16th over of England's innings when Pakistan bowler Harris Rauf was bowling.  Livingstone hit a lofty shot on long on just before the first ball of the over.  The shot landed on a rugby pitch outside the stadium, crossing a 3-story building.  However, no match was played at the rugby ground at the time so no major mishap occurred.

Livingstone hit a century in the first T-20 match