Rani Ki Vav or 'Queen's Stepwell' is a distinctive form of water storage system located in the small town of Gujarat called Patan, on the banks of River Saraswati. Believed to be the grandest stepwell in the state of Gujarat, Rani ka Vav epitomises the peak of Maru-Gujarat architectural style. The 900-year-old structure listed as a UNESCO World Heritage Site is displayed prominently in the new ₹ 100 currency note issued by the Reserve Bank of India. 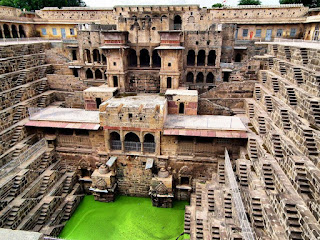 In the olden days, the water of the well had medicinal properties which helped ward off diseases like viral diseases and fever. The well was excavated in the 1960s in a well-protected state as it was buried under slit for sanctuaries. In addition to this, Rani Ka Vav was an important centre for socializing among the locals as well as taking refuge from the heat. It's an excellent example of turning something functional into a piece of art.

The Rani ki Vav in Patan, about 133 km. from Ahmedabad, is amongst the finest stepwells in India, and one of the most famous legacies of the ancient capital city of Patan. Rani (Queen) Udayamati commissioned this vav or stepwell in 1063 in the memory of her husband King Bhimdev I of the Solanki dynasty. The steps of the vav begin at ground level, leading you down through the cool air through several pillared pavilions to reach the deep well below. There are more than 800 elaborate sculptures among seven galleries. The central theme is the Dasavataras, or ten incarnations of Lord Vishnu, including Buddha.  At the water level there is a carving of Sheshashayi-Vishnu, in which Lord Vishnu reclines on the thousand-hooded serpent Shesha

Rani-ki-Vav, on the banks of the Saraswati River, was initially built as a memorial to a king in the 11th century AD. Stepwells are a distinctive form of subterranean water resource and storage systems on the Indian subcontinent, and have been constructed since the 3rd millennium BC. They evolved over time from what was basically a pit in sandy soil towards elaborate multi-storey works of art and architecture. Rani-ki-Vav was built at the height of craftsmens’ ability in stepwell construction and the Maru-Gurjara architectural style, reflecting mastery of this complex technique and great beauty of detail and proportions. Designed as an inverted temple highlighting the sanctity of water, it is divided into seven levels of stairs with sculptural panels of high artistic quality; more than 500 principle sculptures and over a thousand minor ones combine religious, mythological and secular imagery, often referencing literary works. The fourth level is the deepest and leads into a rectangular tank 9.5 m by 9.4 m, at a depth of 23 m. The well is located at the westernmost end of the property and consists of a shaft 10 m in diameter and 30 m deep.

Mertunga wrote about how Queen Udayamati had built the stepwell as a memorial to her husband, King Bhimadeva I, who had built the great Sun-Shiva temple at Modhera. This is plausible since the construction of watering places was considered to be a meritorious act, especially to commemorate the dead, which is why innumerable stepwells were built over the centuries in western India. In the barren and featureless landscape, these subterranean structures with their ornate interiors make a strong impact on the mind of the visitor who chances upon them.