The construction of the Ram Mandir in Ayodhya is going on in full swing, with the temple likely to be opened for devotees just before the 2024 Lok Sabha polls. 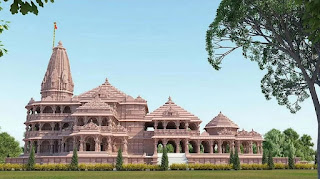 The 3D video depicts the Ram Temple surrounded by lush green lawns. The pillars and the walls of the main temple will have designs of gods and goddesses. The temple will also have marble flooring and sandstone walls, the video shows.

The captivating video of the Ram Mandir in Ayodhya also shows the patterns being created on the top and floor. The grand temple will be surrounded by several smaller temples on all four sides

Shri Ram Janmbhoomi Teerth Kshetra Trust released a 3D preview of the complete temple on 13th February 2022 in the evening from its official Twitter handle. The grandeur of the Ram Mandir being constructed in Ayodhya is felt very well in the rendering shown in the video.

Shri Ram Janmbhoomi Teerth Kshetra Trust has written in its post, “You all must be curious about how the Shri Janmabhoomi Mandir in Ayodhya will look once it is complete. To give you a preview of this divine project, we have tried to present it through a 3D video. Jai Shri Ram!”

In the opening frames of the 3D preview, Shri Ram Janmbhoomi Teerth Kshetra Trust has credited M/S C. B. Sompura Temple Architect who has conceived the design of the grand temple. Followed by this, the Trust credits in the preview, CSIR (Council for Scientific and Industrial Research) – India and CBRI (Central Building Research Institute) – Roorkee for their contribution in 3D structural analysis and structure of the grand Ram Temple.

L and T Constructions is the Design Consultant and EPC Contractor of this project. So, this company is also credited in the next frame. Tata Consulting Engineers Limited is the company looking after the Programme Management Consultancy /services being provided to the temple construction project. The company is mentioned in the video. After Tatas, the Trust has credited Design Associates INC Architecture company that is looking after the master planning and the architectural design services for this project.

After the credit roll of initial 30 seconds, the video unfolds all the design details of the grand Ram Temple that is being constructed in Ayodhya for the last one and half years. 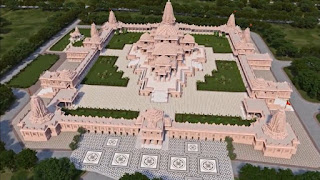 It then zooms in to hover over the actual temple site of approximately 3 acres to give an angled view. The symmetrical designs of the major plot layout attract the sight with perfect right angles dividing the plot into major sections. 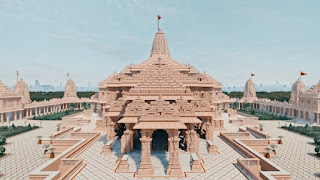 Besides the grand Ram Mandir and boundary walls with decorated Makharas, Mandapas, and Mahadwaras, proper areas are left vacant for vegetation. The greenery seen in the preview is comforting the eyes.

The temple will be 235 feet wide, 360 feet long, and 161 feet high. Once complete, the temple complex will be the world’s third-largest Hindu shrine. It is designed in the Gujara-Chalukya style of the northern Indian temple architecture 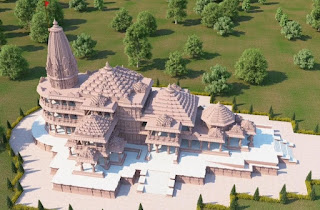 It will have five mandapas and every mandapa will have a shikhara. The tallest shikhara will be on the Garbhagriha. The temple will be approached via 16 feet wide staircase. The Makrana red stone design temple complex will have 366 pillars. The pillars will be decorated with Indian designs and they will depict different Hindu deities like Shiva, Saraswati, Ganesh, etc. 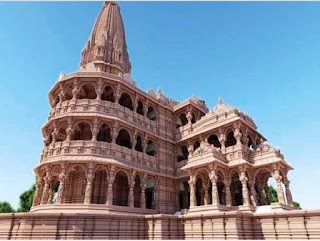