Hanuman temple, Salangpur is a Hindu temple located in Salangpur, Gujarat and comes under the Vadtal Gadi of the Swaminarayan Sampraday. It is the only Swaminarayan Temple which does not have the Murtis of either Swaminarayan or Krishna as the Primary deity of worship. It is dedicated to Hanuman in the form of Kastbhanjan (Crusher of sorrows). Hariprakash Dasji A.k.a. Hariprakash Swami is trustee at Present. 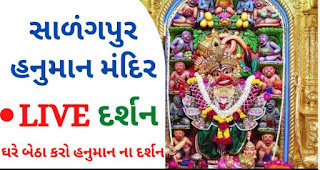 This temple is among the more prominent ones in the original Swaminarayan Sampraday. The idol of Hanuman was installed by Gopalanand Swami. According to author Raymond Williams, it is reported that when Sadguru Gopal Anand Swami installed the idol of Hanuman, he touched it with a rod and the idol came alive and moved. This story has become a charter for the healing ritual performed at this temple.[1] The idol of Hanuman here is a stout figure with a handlebar moustache, crushing a female demon under his foot and baring his teeth, standing among sculpted foliage full of fruit bearing monkey attendants.[2] In 1899, Kothari Gordhandas of Vadtal appointed Shastri Yagnapurushdas to manage the affairs of the mandir; during his tenure, Shastri Yagnapurushdas renovated the site, built the adjacent bungalow, and acquired more land for the complex to bring it to its current state.[3] Yagnapurushdas then broke away in 1907 and created BAPS. Govardhandas then appointed a new mahant of the temple of Sarangpur. Since, then the Vadtal Gadi has constructed additional improvements and buildings to the temple.

This Hanumanji temple is considered most holy and sacred. It is among the more prominent ones in the Swaminarayan Sampraday. The image of Hanuman was installed by Sadguru Gopalanand Swami on Ashwini vadi pancham - savant 1905 (as per Hindu calandar). The image of this temple is said to be so powerful that a mere look at it by people affected by evil spirits,drives the evil spirits out of the people affected. Sarangpur is easily reached by bus or car, as it is only 82 km from Bhavnagar. There can be a long wait at the temple gate sometimes, mainly on Saturdays.

Devotees chant the Swaminarayan Mahamantra while going around the Sarangpur Hanuman Temple.

Mangla Aarti: “Jai Kapi Balvanta” is the Aarti of Sarangpur Hanuman Temple. The Mangala Aarti or Aarti which takes place at 5:30 am is done by waving a piece of lighted camphor in circles around an idol of God. The Deities offer the first darshan of the day, signifying the auspicious beginning of the day for devotees.

Shangar Aarti: Shangar aarti done at 7:00 am is performed every Tuesday and Thursday mornings. Shangar means adornments. During this aarti, the Deities are dressed and adorned.

Rajbhog Aarti: During the Rajbhog aarti takes place from 10:30 am to 11:00 am. Royal offerings of the mid-day meal are offered to the devtas.

Sandhya Aarti: This aarti is performed during the evening depending upon the timings of the sunset. Devotees gather to seek the darshan of the deity and offer their prayers during the Sandhya Aarti.

Shayan Aarti: After the Shayan Aarti, the darshan is closed for the devotees. It signifies that the Deities are about to retire for the night.