Breaking News: Students of Std. 1 to 9 and 11 get mass promotion, Gujarat Board's Std. 10 and 12 exams postponed

Breaking News: Students of Std. 1 to 9 and 11 get mass promotion, Gujarat Board's Std. 10 and 12 exams postponed

The state government has taken one more decision in the interest of the health of the students as Corona is roaring across the state.  Direct education in classes 1 to 12 across the state, i.e. classroom education will be closed till May 10 or any other order by the state government as well as standard 10 and standard 12 board examinations in Gujarat which were to be held from May 10 to May 25.  Has decided to suspend for the time being regardless of the prevailing situation.

The state government has said that the new dates for the exam will be announced on May 15 after reviewing the status of the corona transition.  With the announcement of these new dates, it has been decided that students will be given at least 15 days to prepare for the exams, as well as mass promotions will be given to students in Std-1 to 9 and Std-11 in the state this year.

Earlier, DivyaBhaskar had prepared an exclusive report on December 21 on giving mass promotions to students of Std 1 to 9 and Std 11.  4 months after the report, the state government has announced the decision of mass promotion.

In view of the prevalence of Corona transition across the state, the state government has taken a further decision in the interest of the health of the students by announcing that direct education in the classes of Std. Will be kept closed. 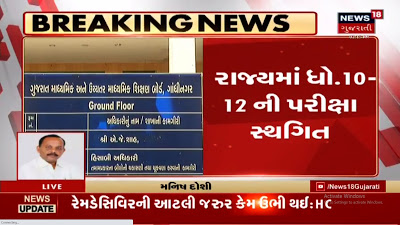 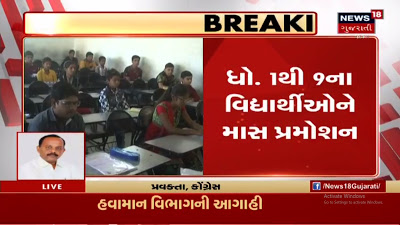 Corona's case has raised concerns among students and parents that no decision has yet been made on the exam, with parents now demanding that the exam be canceled or postponed.