It is the wedding season and everyone wants to make the most out of it. While big fat Indian wedding has become a common trend, some are still willing to practice mindfulness by cutting down on wastage and bringing sustainable products in use. In one such incident, Shivabhai Ravjibhai Gohil from Gujarat’s Bhavnagar district made sure that his son's wedding invitation are thoughtful. 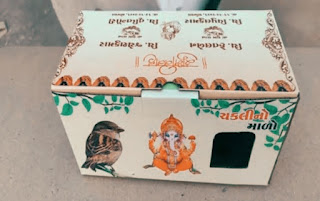 It is the season of weddings. In such a situation, many wedding cards are collected in the houses, which are of no use and later which are thrown in the garbage. There are many people who also print very expensive and precious cards to make the wedding special and memorable. But, a person from Gujarat has got such a wedding card printed that despite not being expensive, it has been in the news. This card is so wonderful that a bird can comfortably make its home in it.

Shivbhai Raojibhai Gohil, a resident of Bhavnagar district of Gujarat, decided that his son’s wedding card should be unique and memorable. That’s why he got a card printed, which people would not like to throw. Meaning that instead of throwing it in the garbage, people can also make it a bird house. Yes, this card becomes a nest, in which a sparrow or any other small bird can live comfortably.

Let us tell you that some time ago the wedding card of a lawyer was also in the news a lot. Which people were saying that it is an invitation letter or a legal notice. Actually, both the language and design of this card are very ‘legal’. On which it was written, ‘Notice of Wedding Reception’. They are getting married under Article 21 of the Indian Constitution. Apart from this, the Hindu Marriage Act 1995 has also been mentioned in the card.