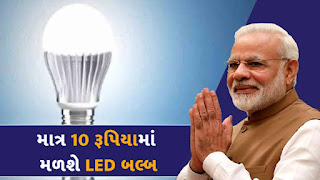 Gujarat CM Vijay Rupani Decided To Reduce The Price Of LED Bulb Following Overwhelming Response By People Under Pradhan Mantri UJALA Yojana Gujarat. As Per His Decision, The Bulb Will Be Sold With Price Of Rs. 65 Per Bulb For Cash And Rs. 70 Per Bulb For EMI Along With Keeping Similar Rate For Both Residential And Commercial Consumers Of The State.

Chief Minister Shri Rupani Has Also Decided To Initiate Selling Of LED Tube-Light And 5 Star Rated Energy-Efficient Fans Under Domestic Efficient Lighting Programme Launched By The Union Government. As Per His Decision, 20 Watt LED Tubelights Will Be Given To Consumers With A Cost Of Rs. 210 By Cash With A Total Reduction Of Rs. 20 In Its Price Assigned By The Union Government. 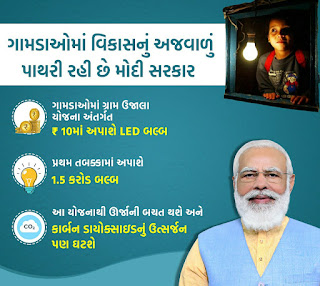 States where UJALA scheme is implemented:

Document Required:
Last filled electricity bill and photocopy of it.
Own photo ID
Certificate of Proof of Residence – which must be the address indicated on the electricity bill.
Details of the amount paid and the amount to be paid in arrears if the price of the bulb cannot be paid at the time of purchase – which will be added weekly to the electricity bill.
Note: Proof of residency is not required if the LED bulb is to be purchased with cash.
Read Gujarati
Official website
Number of bulbs provided per family:
The customer will be able to buy a minimum of 8 and a maximum of 10 light bulbs. Studies show that a family needs five to six bulbs.
How the UJALA scheme works:
Energy Efficiency Services Limited will distribute incandescent bulbs to customers at 40% of the market price.
Capital investment required for the scheme is EESL. Will.
The energy actually saved in five years will be paid to EESL by Discom free of cost.
The scheme will not require any subsidy from the Government of India.
The scheme will have no effect on electricity rates.